How We Drink Tea: Teh Tarik

The man behind No Name Sarabat stall Teh Tarik

Opposite the popular Nasi Campur (‘mixed rice’) stall Kampong Glam café, at the junction of Baghdad Street and Bussorah Street in the Arab quarters of Singapore, is a small and inconspicuous ‘sarabat’ (drink) stall commonly identified as ‘No Name’ due to its lack of signage. Run by a wizened white-haired Indian Muslim man and his middle-aged counterpart, the stall has become famous for its Teh Tarik, a tea drink that is typically made from mixing Ceylonese black tea with condensed milk. The characteristic feature of the tea is the frothy texture of the drink, which is generated by the continuous transference of the tea from one stainless steel mug to another with an aerating ‘pulling’ action.

This is how Teh Tarik gets made, according to Singapore Infopedia:

The process of making teh tarik starts with adding evaporated and condensed milk to boiling water. Once the brew is bubbling, it is taken off the heat and the mixture strained into a tin mug. The tea is then poured from a height of about a metre into another mug. This process of “pulling” the tea is repeated a number of times until a layer of froth forms over the drink before it is served. The tea should preferably be “pulled” longer than an arm’s length. The “pulling” process cools the tea and enhances its flavour.

Click to watch video of the making of Teh Tarik 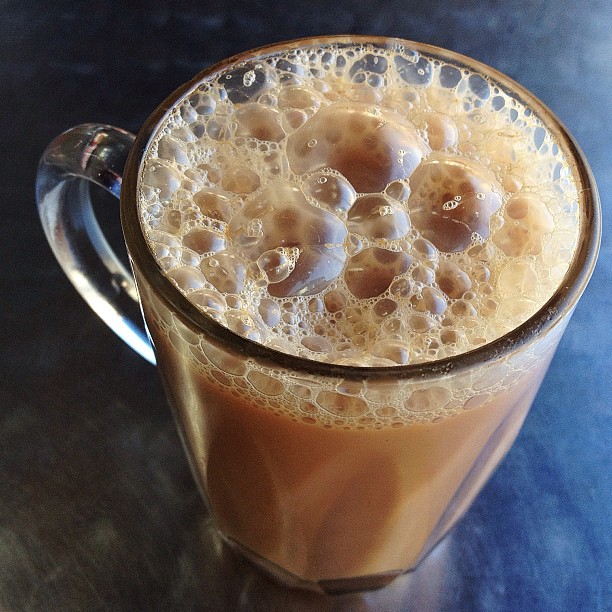 Teh Tarik by Alex Ortega

Teh Tarik is a drink indigenous to Malaya –– it is widely regarded as Malaysia’s unofficial national drink and is also enjoyed in Singapore. ‘Tarik’ means ‘pull’ in Bahasa Melayu, while ‘teh’ generally refers to tea with condensed milk. The drink has been popularised by Indian Muslim drink stall owners who also sell ‘teh’ made with evaporated milk, as well as a ginger tea version known as Teh Halia. Fresh milk is almost never used in the making of Teh Tarik, as sweetened forms of milk are required to mask the mildly acrid taste of the tea which tends to be of a lower quality.

The drink is most commonly paired with Roti Canai (as the name of it goes in Malaysia)/ Roti Prata (as it is known in Singapore), a dough pancake made from ghee, flour, egg and water which is then panfried on a flat griddle in ghee. Teh Tarik is consumed at all times of day. Modern innovations to the tea have included the addition of ice for a cool sip, and the inclusion of much more milk and froth (now termed as the Teh Cino). Tea producer Lipton has a 3-in-1 Teh Tarik product which promises instant Teh Tarik from a satchel, while contemporary Singaporean ice-cream parlours have turned it into an ice-cream flavour.

On our recent visit to the ‘No Name’ Sarabat stall, sitting at the five foot way as we drank our tea, we noticed a slim young woman run to the counter of the stall to order two cups of Teh Tarik. Running back to the large SUV parked on the opposite curb, she passed the cups to the driver and his front seat passenger. We watched as the driver and his friend savoured the tea in the cool environs of his air-conditioned car as we sweltered quietly under the stall awning drinking our own tehs. Before long, the young woman was running back to the stall with emptied glasses. The car drove off.

Locals ordering teh from the No Name Sarabat stall

Meanwhile, tourists thronged the area and the stall saw some older locals queuing with orders of teh. A tall young Chinese man walked past the stall with a trail of young charges in uniforms and backpacks after him. “这是印度拉茶 (This is ‘Indian pulled tea’),” he told his students in the midst of their chattering, drawing attention to the longstanding association between teh tarik and their Indian Muslim makers.

(This post was written with the insights of Jeremy Fernando)

There are black people in Asia?